Digital Media Signage – are you ready to own your (Google?) TV channel?

It is not a secret any more that Digital Signage is extremely interested in the ongoing revolution in the TV broadcast world, the Android Based TV. The Industry is looking for the best possible way to create Media for signage. It all seems to blend… The TVs are becoming ‘Smart’ from one hand currently using some form of proprietary Operating System, but it won’t be long till the manufacturers will realize it is better to use one of the most common Operating Systems – Google Android. From the other hand, dozens of Hardware vendors are offering all sorts of small Boxes/Devices/Dongles that can be applied on the TV ‘dumb’ screen and add to it capabilities that were not present in the market until two years ago… These Android Based Devices are now being implemented by fast responding Digital Signage vendors as Digital Signage Players.

These devices are ‘smart’ enough to run Software (Well, not all of them, but some, and the rest are improving rapidly), they have Wi-Fi capabilities and they are changing the industry. in a world where ‘content is king’ from one hand, but the expectations from customers, especially SMBs (Small and Medium Businesses) is for cost effective solutions, the winner will be the vendor that will provide the best CMS (Content Management System) in the best Price, with the simplest User Interface that will allow ‘common people’ to Build, Edit and broad cast theirmedia for signage.

Some Companies have recently launched a sophisticated yet simple Digital Signage Editor that enable the user, with Limited IT capabilities (But with at least minimal design skills) to create Media For Signage, using internal design tools, external sources (Like YouTube, RSS, Web sites) and embedded widgets that can be implemented while building media based signage campaign, using Digital Signage software platforms.

We got used to see Media and Content as it is presented by the broadcast TV channels, till two decades ago. We grew to learn that web sites are also Media Broadcast channel. YouTube is the most obvious example, but we have millions more web sites that broadcast content to a targeted audience.

It is high time we get used to another fast growing Platform for Broadcast – the Media Signage. Digital Signage is becoming a Personal TV Channel for SMBs. These Businesses can createMedia for Signage, broadcast and manage it, using Digital signage Software tools in a cost that will not break their budget constraints.

Owning your own TV channel had never been easier… 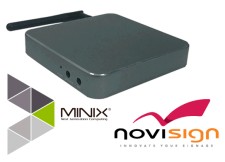