How to create a unique video wall?

Videowall is one of the coolest WOW effects of the digital signage industry. I this tech post, I will show you how to create several unique video walls. The focus will be on the content side and less on the hardware side (for the hardware side, you can read our article about 3 ways of how to build a video wall). We did all of them using 10″ professional displays of Primeview, but this can be done with any professional displays that allow daisy chaining. It can also be done using a videowall switcher/splitter. 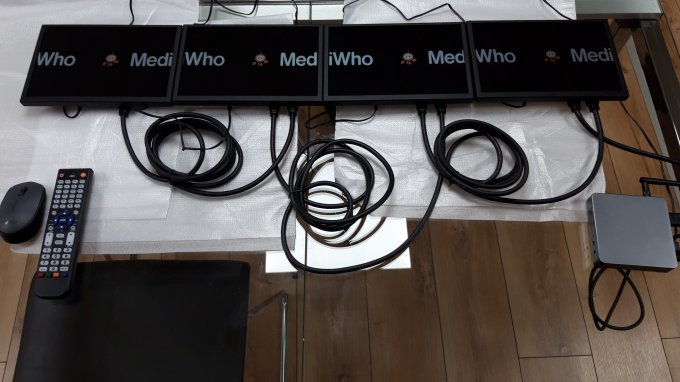 Now, the challenge is how to create your video in the Creative Composer of our online Studio to make it fit your video wall?

b) A video of 3840 x 2160p, which its top half is consisted of the content to be displayed on the 2 left displays, while its bottom half consists the content of the 2 right displays:

You can also align those 9 displays in a 9 x 1 video wall (that means one horizontal row of 9 displays). In the following example, you can see how we made one video that will look good both on 3 x 3 and on 9 x 1, where the object keeps moving between the displays. Just imagine that if you had to make one video of long strip (which would have been 3840 x 251p, to keep aspect ratio of 16×9 : 9), in that case each display could have got only 426.6 x 251p screen resolution which would be very blur. Hence, putting up a video in a 3 x 3 grid-like position would end with a much better result of 1280 x 720 (HD) for each of the 9 displays:

Some displays, such as custom LED displays, may have a non-standard screen resolution, sometimes even very low resolution.
This is relevant not only for video walls, but also when displaying content only in a single TV display.
Imagine you have a LED display of 640 x 200p. Something like this:

This is definitely not 16:9 and none of the Android media player supports this resolution.
So, if you build a creative to be displayed in this 640 x 200p LED display, then a composed creative which is set to custom dimensions of 640 x 200 pixels or to custom dimensions of 16:5 aspect ratio – this will not work good on the Android box, because the Android box doesn’t know how to process it well (since it doesn’t support this unorthodox screen resolution).
The right approach here will be to build a 16:9 standard creative and then place the content somewhere within the creative. Where is that somewhere? It is a matter of trial and error. It may look like this:

That means, you will need to do some trial-and-error in order to find out where is correct rubric, on the canvas, that will appear on the physical screen (and that is very individual to the custom screen resolution of your special TV display, combined with the supported screen resolutions of your Android box).
To shorten this process, you can put an image on the whole canvas and see which part of it is chopped off and which part will be taken into this 640 x 200p display borders. An image with a grid and numbers, like in the following example, will do the trick and will allow you, in a better way, to figure out which part of the canvas is actually displayed on the physical LED screen: